My house used to be a menagerie. Five dogs living, more or less, in harmony. You learned to overlook the occasional outburst from grumpy Bella, so full of fiesty swagger she picked on Sunny, a dog twice her size. Bella went blind and learned humility late in life. Better late than never.

Five dogs is a lot for one home. We didn’t plan it. We found them or they found us. Hard to say who rescued whom.

Now we have only two dogs and our house is much quieter. We lost Bella and Bailey last autumn and Tinker just last week. Losing Tinker was the hardest hit. He was my good friend. He was also the last pack mate of our first dogs Lucy and Jasper. Losing Tinker was losing a link in a chain that went back to the beginning of my marriage.

My wife and I have shared our home with eight dogs since the beginning of our marriage.

Lucy found us while we living in a tiny one bedroom apartment with a kitchen so small you couldn’t open the refrigerator and the stove at the same time. Lucy ran across the intersection one rainy night. Fearing we had run over her, we stopped the car. My wife opened her door and called, “Puppy?” Lucy jumped into the car and went home with us. She was a wise, patient, noble soul with a passion for stolen bread. She loved kids and skunks. Fun fact: you can turn a terrier pink by using tomato sauce to cut skunk spray.

My wife found Jasper while donating aluminum cans to the animal shelter. I was finishing graduate school and we had just bought our first house. Jasper, a Manchester terrier, was picked up by animal control in a local coal yard, riddled with worms. We had to quarantine Jasper for 10 days in my mom-in-law’s garage while purging the worm infestation. If you’ve ever had a nightmare where plates of unsauced spaghetti come to life and start looking for you, you’ll know something about those 10 days. Jasper recovered and quickly adapted to his new life. He never lost his dread of hunger or his anxiety about being abandoned. He was the most loyal, care taking dog we ever had. Jasper was our nurse. My wife put an axe into her leg one evening while I was at work. She managed to drag herself into the house before passing out in the bathroom. Jasper cleaned up the scene and woke Michelle with kisses. Medical science does not recommend dog licks as a cure for cuts and abrasions but Jasper’s kind kisses healed many wounds in a fraction of the normal time. 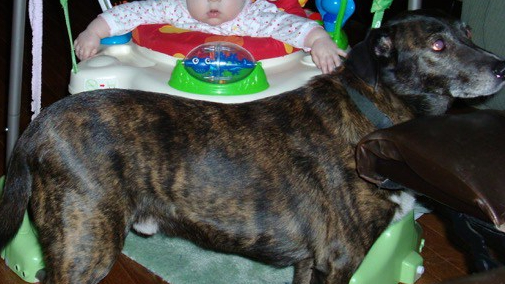 We found Bailey at the animal shelter. My wife thought Lucy’s mothering instincts deserved a puppy. We came home with a full grown golden retriever mix, instead. Bailey was our happiest, friendliest dog. He also had the worst breath. He liked to get up close and personal. You just held your breath and went with it. Bailey loved toys but rarely actually played with them. He mostly just enjoyed seeing how many he could carry in his mouth at one time and obsessively moved them from room to room to keep the other dogs from stealing them. He had long, luscious fur and everyone assumed he was a lady. He was pretty. We might have called him Bowie. He gave the impression of being large, but, when shaved for summer, was quite small. 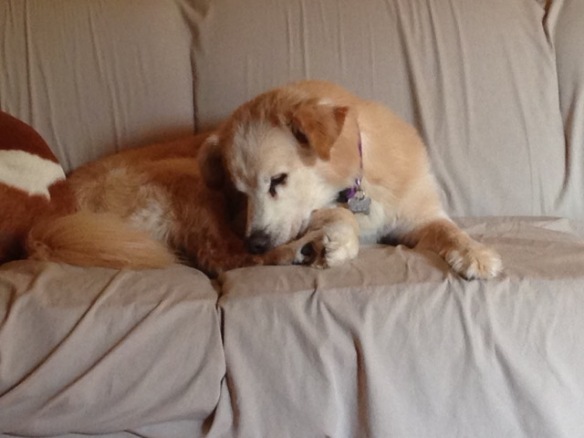 I found Tinker while on a run. He was sniffing around a dumpster in front of the low-rent apartments across the street. I picked him up and carried him from door to door asking if anyone knew him. No one did. I took him home. Bailey got excited, having found his good friend. We kept Tinker. Tinker was a dachshund/chihuahua mix, a scrappy low-rider. Bailey was big and Tinker was small. Looking at one another and lacking mirrors, each assumed the other reflected his own proper size and stature. Bailey thought he was small. Tinker thought he was big. It worked for them. I used to carry Tinker around like in one arm, like a football. Or a loaf of bread because why would I be carrying a football? Being carried was Tinker’s favorite place to be. 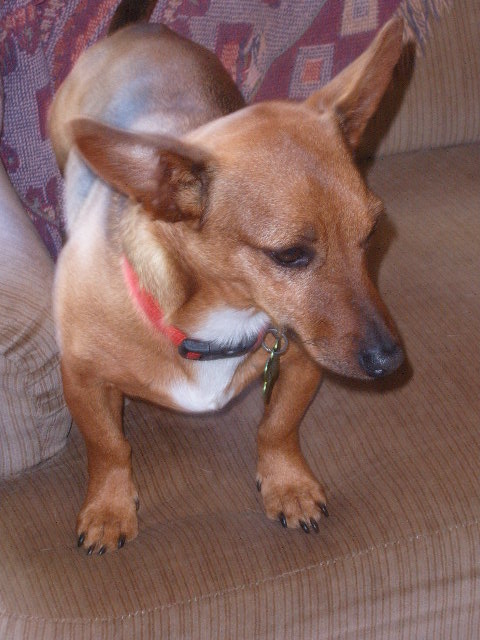 Phoebe wasn’t with us long. The neighborhood kids found her roaming around and decided to bring her to the crazy dog people house. She was a black lab/hound mix and the smartest dog I’ve ever met. She could work out problems like how to bring a six foot tree branch through a twelve inch dog door. The dog actually dropped the branch, studied the problem and then brought it through sideways. I’m pretty sure she understood quantum physics and relativity. Unfortunately, she was also a touch aggressive when it came to pack dominance. When our daughter was born, Phoebe decided to challenge Lucy for head of pack status. She attacked Lucy while Lucy was sitting on the couch near Michelle and newborn Emersey. She would never have intentionally hurt anyone but was ready to kill Lucy. No longer able to trust her, she had her put down the next day. It was the right decision but not finding a new home for Phoebe still stings. 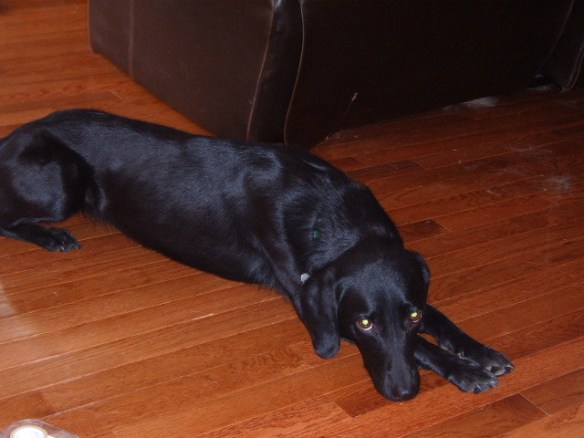 Michelle and Emersey ganged up on me to adopt Sunny. They went to the animal shelter while Michelle was feeling depressed. Sunny was a hound who had lived her entire life inside an apartment with an elderly shut in. Sunny was pad trained but had developed a grass allergy because she had never been outside. She didn’t trust men and freaked out everytime someone came to the door. People didn’t come to the door where she had lived before. Certainly not men. For five months, she barked in confused anxiety when I came home from work, as if she didn’t know me. And then, one day, she chilled. That’s the power of putting down the dog food. Food, eventually, equals trust. We are friends now. 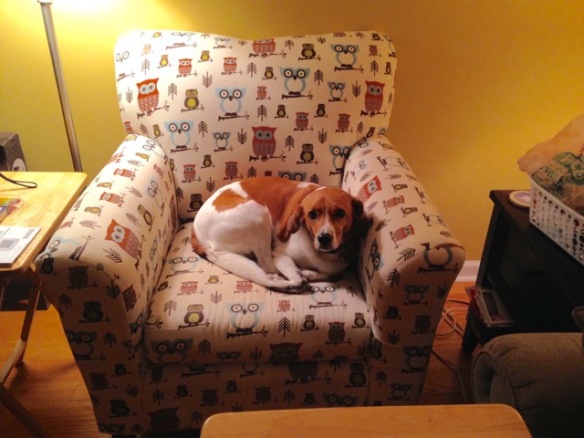 Nellie came to us from Michelle’s grandmother, who at the age of 90, decided she couldn’t live at home alone anymore. Ma and Nellie moved in with us for one day and then Ma decided she could live at home alone after all. Nellie stayed. Nellie is an 18 year old Jack Russell terrier mix. We attribute her longevity to the fact that Ma cooked chicken breast and rice and vegetables for dinner everyday for years. Nellie is a bit neurotic, but who among us is not? She loves my wife fiercely and follows her around the house all day and night, keeping herself in sight at all times. 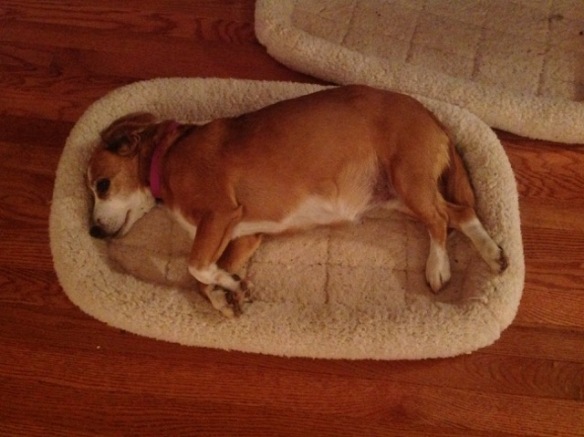 Bella was a true mutt and a true rescue. My mother-in-law took Bella in as a temporary foster while taking radiation for Stage 4 lung cancer. Bella’s sojourn was meant to a temporary stop over on her way to another home. Everything at that time was temporary. We lived day to day, grateful for the moments we still had together. I am still amazed at the generosity my mom-in-law showed to help a dog while she herself was dying. Dog people are special. Bella was meant to catch a ride north with a relocation/rescue service but she missed her ride because the program  organizer was a flake. After three missed attempts, we took Bella in permanently. I suspect that was the organizer’s plan all along. Bella was an older dog who had whelped many litters in a puppy mill. She had been misused and was tired and crabby about it. She didn’t easily tolerate the fun and games of the other dogs and often growled at Sunny for breathing too much of her air. Bella went blind one week while we were on vacation. We returned to find her stumbling under tables and trapped by chairs. We never learned why she went blind but the blindness taught her humility. She learned to enjoy being held and tolerated the presence of other dogs. 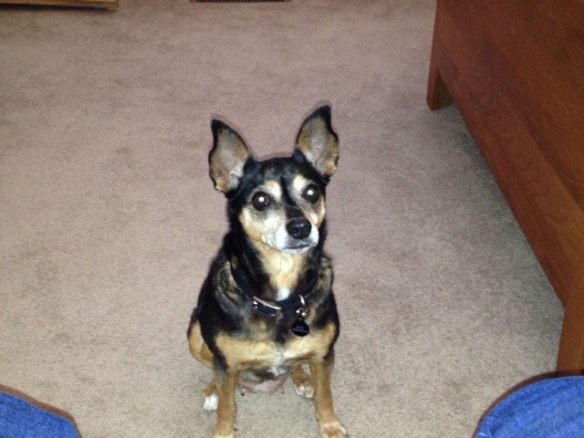 Eight dogs so far, but right now only two. We have Sunny and Nellie. Nellie is very old.

When we said goodbye to Bailey, my daughter asked why dogs lives are so much shorter than ours. I told her it was to help us practice loving them completely even when we know we will eventually lose them. That is, it seems to me, the secret of a well-lived life. A life well-lived is a life where you have allowed yourself to love completely despite the knowledge of inevitable pain, disappointment and loss. Our dogs prepare us for the harder times when we must say goodbye to the people we most love.

My house is very quiet. I miss my good friends. I am grateful for them and for their help with the practice of loving in the face of certain loss and the bravery required to open oneself to the loss that makes life much richer and bigger than before. 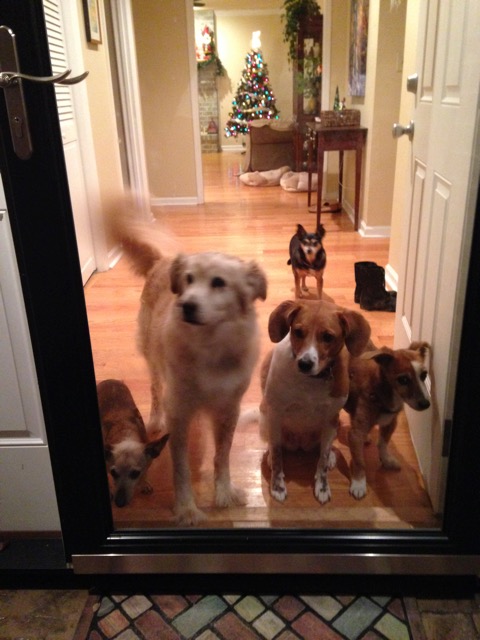 2 thoughts on “Menagerie: Our History Told in Dogs”