Stephen King spoke to a crowd of 2000 people at the Ryman Theatre in Nashville last night. I was one of those 2000 people.

It was a pretty special night for a lot of people. Advance tickets sold out in just a few hours. The line to get inside the Ryman wrapped all around the building. 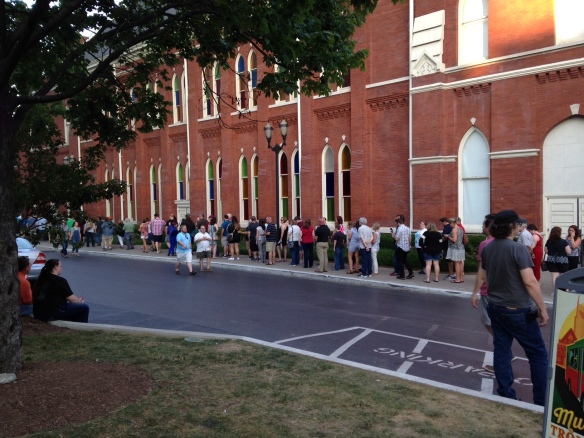 The Ryman itself is a spiritual place, an historic church and meeting place converted into a performance space. Presidents Teddy Roosevelt and Taft spoke here. So did Helen Keller and Ann Sullivan, Charlie Chaplin and Will Rogers. Harry Houdini performed here. Lester Flatt, Bill Monroe, Patsy Cline, Hank Williams and later Johnny Cash, Willie Nelson and many others performed when country music was just called music.

King spoke for a over an hour, roaming back and forth across the stage, telling anecdotes of his guitar work with the Rockbottom Remainders, the time he had dinner with Bruce Springsteen, and his recovery from the roadside collision that almost killed him.

He took a few questions from the audience, handled the gushing adoration of a few intoxicated fans, and deftly deflected all questions about his opinion of the many movies, past and future, based on his work.

Growing up, I always imagined I would be a famous author some day, and, as famous authors do, I would routinely be having dinner with Stephen King, my family and his family. We would sit and talk about the books we were reading, the movies we were watching and would hash out ideas for things we were working on.

That is never going to happen. For me, last night at the Ryman was the next best thing.

King’s earliest books — Carrie, Salem’s Lot, The Dead Zone, Firestarter and Cujo — more than any other books, made me want to be a writer. Through middle school, I penned short stories in longhand on notebook paper trying to emulate his style. My eight grade English teacher caught this and remarked that I was well on my way to being “the next Stephen King.” I never forgot the compliment, though I realize now that being “the next” anything isn’t what one should strive for. One should work hard to be one’s self.

Emulating a cherished author’s voice is an important part of learning craft but finding your own voice is far more rewarding. That is a constant work in progress. King spoke of the moment a person discovers their talent as a kind of waking up to their life. He talked about Jerry Lee Lewis seeing a piano for the first time. That is what writing is like for him. It is what writing is like for me.

King’s On Writing is one of my favorite books about writing. He offers clear, practical advise about learning to write. It all pretty much boils down to this: There are no short-cuts. You learn to write by writing. You should finish the things that you start, and you should write every single day.

This, I think, is good advice. Still, a person hopes that there might be a secret, some little snatch of code that can be gleaned from a master to make your own journey a little easier. There isn’t. “Writing a novel is like crossing the Atlantic in a rowboat. It is really, really hard.”

There you have it. Stephen King said writing is hard. The fact that I find it incredibly hard doesn’t mean I’m doing something wrong. It doesn’t mean I’m lacking some secret skill or missing some key experience that will make it much easier.

The work doesn’t get easier, but, if you can keep at it, it can be incredibly rewarding. As inspiration goes, it cuts both ways.